this is such a great game. thank you

AHEM aside from that its a good game

okay he may be a psychopath but he's also incredibly hot

A spooky game for Halloween is just what the doctor ordered! I liked it. Got all three of the endings in the recommended order. It was a nice touch that there were some differences before the ending too, such as the different videos in the commercial break.

This was excellent, really enjoyed it

Very cool! Very nice! My friend and I enjoyed playing it and the endings were so good. 10/10. We loved it.

An eyeball a day keeps Albert away

I love the style of this game, both in terms of art and writing- the characters are memorable, and the atmosphere is fantastic. Would definitely reccommend.

Omg the JoJo references. Did not expect that. And love the game too but really wish I could at least skip tho.

I can see that Vincent wasn't satisfied with Dr. Krueger's therapy, what a shame huehehehehe. Overall, I really love your game!!! Oh, wait, sorry! I meant gameS!!! I knew this style looked familiar and was amazed seeing that you're also the developer of Morfosi! The first ever game of yours that I played!!! And also the game with Vincent?!?! What?!?! How talented are you?!?! Huehehehe, keep up the good work!!! 10/10 would recommend!!! A part of me expected that Taylor truly needed therapy and was just making Krueger look like the bad guy, but damn! Wasn't disappointed though, the endings are still cool! I hope I get to see a mention of Dr. Krueger in Vincent's game!!! Kinda want to discover their past with each other. Your art and story style are very eye-catching! <3

This game is amazing! The character designs and story are phenomenal, and the endings were so good! The last ending definitely had me tearing up a bit, overall, the game was incredible and I'm so excited to see what else the dev comes up with next!!

I love this game! Of course the last ending was my favorite… good job dev :D

This is a great game! Totally loved it, and I'm really excited to see what this dev does next! :

The game looks interesting, from the mysterious therapist to the funny dull main heroine I feel like I need to study the game more but some hints help you a lot.

I thoroughly enjoyed this game. I like the slow burn with suttle hints to something sinister. I like games like this that play at nothing being wrong, even tho there clearly is.

I've seen Manly play this, and I have to say, this game is pretty neat. I do have a few criticisms, though.

1. Some segments feel like they have repetitive dialogue, such as the paper minigame. A suggestion would be rather them him saying "Why did you flip the paper?" over and over in a neutral tone, why not have him slowly get more visibly frustrated with every time you flip it over?

2. The commercial/we'll be right back segments were my least favorite part of the game. Something about how they stick out from the retro aesthetic of most of the game combined with how they somehow use Itchy & Scratchy footage with a filter over it threw me off.

I made a meme but there is no subreddit for this game so... 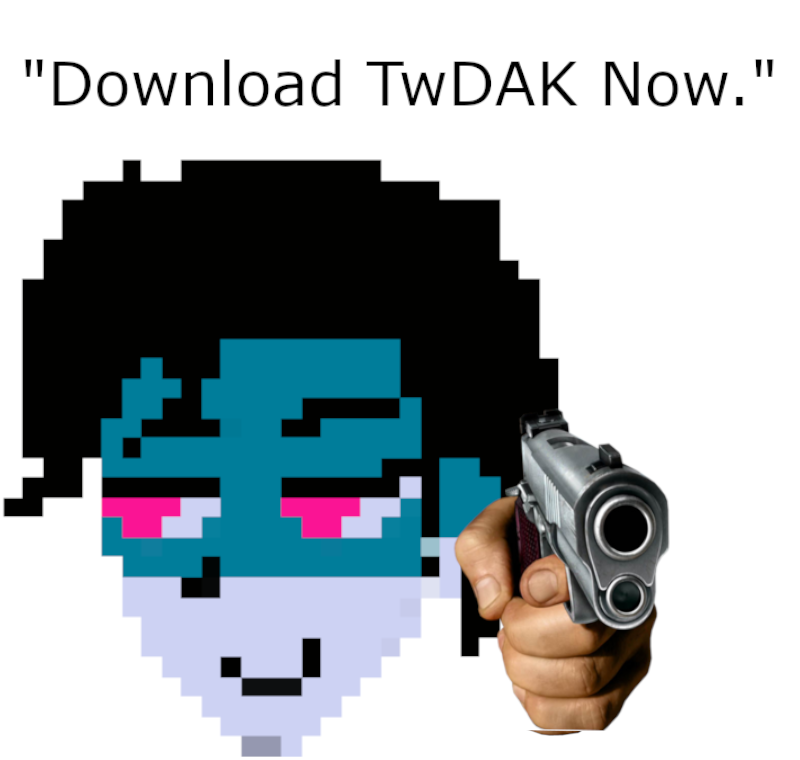 Happy you enjoy it!

Wow, I had a lot of fun playing this game. It was really entertaining. There were a few typos, but nothing too noticeable, and they didn't take away from the excellent experience I had.

Taylor had a lot of personality, which was great. I think it was a really good idea to make them nonbinary, so that anyone could project onto them. In this house we stan Taylor Lee!

Warning, spoilers ahead for all three endings.

I really liked the little commentary Taylor did at the end there! They gave me some helpful advice and I was able to figure out how to get the second ending on my own!

The second ending was a little confusing to me, but I think I understood it. It was really cool seeing all those minor changes in the text as if Taylor had a slight memory of what had happened! And that weird glitchy video was really creepy!

Finally, the third ending. I had to go on the walkthrough to figure it out, but I didn't mind. I absolutely adored the dancing skeletons, they were a great way to break the tension. And then the way that Taylor was able to connect with Dr. Krueger near the end of the session was really cute, and kind of bittersweet. I actually felt kinda bad for him, I know how hard it is to move. And the end part where he messaged his nemesis, it was so cute! (Were you inspired by kismesistude from Homestuck, there? I bet you were.)

Overall, this was a great game, and I plan to look at more of your work, which will surely be just as, if not more, amazing.

I have found it annoyingly hard to get anything but the "bad ending" the fact that you have to listen to the same thing over and over again adn that there is no skipping button makes it even harder. It's cool though, has some real good potential!

Hello ^^ i am a traslator and i want to translate this game for my website, but i need the permission x.x i gonna to translate to portuguese

You should probably message the creator on their social media, they seem to read comments on instagram so I'm pretty sure they'll answer you there!

Hey there! Rance has actually already reached out to me on Instagram, and I have answered them there. That's why I didn't leave another reply here. Hope this clears up the confusion!

The dancing skeletons were the best part. In all seriousness great game.

I really wanted to film it, but it ended before I could

i really enjoyed this game! well aside for when there was spoken dialogue... i have hearing issues that make it difficult to keep up with that sort of thing. i was wondering if you had any plans to add subtitles to the spoken sections? thanks for putting this together! all the games you've worked on have been very unique and i'm always excited to see what's next for you. cheers!

Hi- Yes of course! Are you referring to the commercial part?

yes, the commercial! thanks for considering it.

No problem! I will add it after I'm done with the localization update. My apologies; things have been a bit overwhelming for me, so it will prob take me a bit.

no worries at all! take all the time you need. i'll be looking forward to when the update comes! thank you again <3

Hey there! Hope you are doing well. The subtitles have been added for v1.1.0!

Played through all endings in order (by accident). Wonderfully done! 5/5 would have another session.

Absolutely loved the game! It was very interesting and fun to play.

This game was absolutely brilliant. I was not able to get all the endings. I seem to be stuck on ending one but, enjoyed it despite.

Really great stuff! One of my favourite games on itch.io! You've created a rich aesthetic and very compelling narrative. A few minor points however:

Nitpicking aside I loved it! Good luck in your future endeavours!

this game was absolutely incredible and im just sad there wasnt more of it! its fantastic in every way and the universe and concepts behind it are all brilliantly thought out and impressive and i just love this so much. the art style, the music, the concept, the story, the writing, all of it put together are the perfect combination of a brilliant game. i love it so much and i appreciated every aspect of it. i couldnt stop playing.

Excellent idea with a lot of great choices!

Great game! Can't seem to get the good ending myself but I saw videos of it and yea thanks for making this amazing game!

10/10 star game. It was super cool and interesting. I was wondering what would happen next at all times. I made a video on the game if anyone wants to check it out:

This was a really great game! It gave me undertale vibes with the endings and new dialougs. 10/10 would definetly recommend to a friend!

it could just be me but, im not able to select an answer choice when asked to do a math problem.:/ It looks like a great game though!

Try running the game as an administrator; let me know if it works for you.

Yes it did, thank you so much!

Wow!! This looked great from the screenshots and description but damn did I love this!! I managed to get two of the endings and I have a theory about the third ending but I wasn't able to get it sadly.

Absolutely loved the game.I played it "in order" without really realizing it. I decided by the end after trying to be perfect to just screw him and his correct answers. I just wanted to annoy him, it was really funny to get a rise out of the character. Very bitter-sweet end, even if he is crazy hopefully connecting to his old nemesis helped. Thank you for an amazing creation!! <3 <3

I LOVE THIS GAME. I saw Psychological Horror in the tags and had to know what it was about. The pixel art and variations in the dialog and the sounds were amazing! There were a few typos but overall this game got me and reeled me in!

This was really fun to play, I loved the subtle comedy and the art style was superb! I'll recommend this to my friends for sure.

Reply
Arocta114 days ago(+1)
I played the game, it's super interesting, I was super confused for most of it but I still had fun and (spoilers) I'm not sure how to get the third ending? like I tried both 100% good and 100% bad and a couple times in the middle so I don' know how I could do different. This is a part 1 btw.
Reply
dino999z114 days ago (1 edit)

Hi, the walkthrough is here: