i love this game so much, it has such a good artstyle, music and writing, i just love it. i hope dino will make a comeback <3 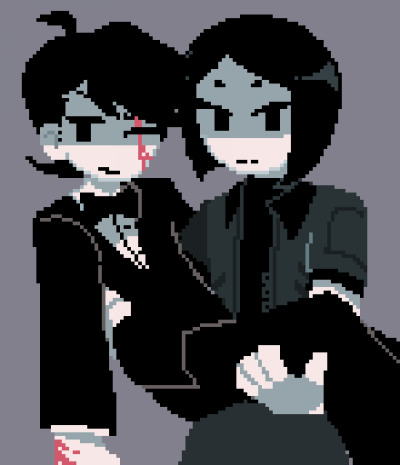 HOW DID I  NOT FIND THIS GAME EARLIER!?


Why must you do this to Draco my beloved? But emotional pain aside, this game is WELL MADE. PERIOD.

just finished this game and- wow !

the story was so compelling and the characters were all so charming.

the puzzles were also really fun to solve.

the twist at the end was amazing and it really threw me off.

can't wait for the next chapter !

The game is in indefinite hiatus, try reading the article above.

ah yes thnx for pointing it out !

i was just reading the other comments saying they couldn't wait for part 5 so i assumed it was going to be realised in a near future !

yea, though the creator might not actually come back. But let's hope for the better!

joke aside, this was truly an amazing game. jaw dropped. i'm literally obsessed, i can't wait for ch5!! ^__^

thx for doing this game for us to play ;-;

I would HIGHLY recommend you play this game!

does anybody know zalmonia's pronouns please the beloved

she/her most likely. zalmona has only been referred to as "she" afaik (havent played ch4 yet tho)

Just finished ch4 and i loved every single minute of it!!! This game is incredible and i can't wait to see more<3

this game made me gay, suing.
jokes aside, this game is an absolute masterpiece.

This game is incredible! I played for hours on end, and I'm obsessed. I managed to complete what's available so far, and it's truly amazing. The plot was wonderful, I enjoyed even just reading the dialogue. The writing was incredibly good, I enjoyed it.

The story was really unique and rich, nothing like I've ever seen before. The art style was stunning, and I adored the designs and personalities of the characters. They're all so unique and well-written!

I hope to see more content on this game in the future, it truly is amazing!

played the first chapter, can wait for u to finish the game. keep it up

Just finished playing what's available so far and I'm absolutely obsessed. I don't often get that feeling of "This is incredible I need more" when I play something but I think this just had all the right notes for me and it was just perfect.

Humor, darkness, mystery, it was clever, there was heart to it, the characters were well written and interesting, and the things left unsaid (that didn't need to be explicitly explained and were left to the audience to go "ah. I get it") were just all well done.

I can't wait to see where you take this project in the future. I'm really impressed with it all!

ive said so many good things about this game and i will literally never stop. the lasting impact this videogame had on my psyche and my overall personality is ridiculous. I never thought stumbling onto a random app in the appstore would change my life this much but it did. i highly reccomend anyone here to donate to dino's kofi and/or spread the word about this wonderful game to anyone willing to listen.

spoiler or smth????
lmao yall try to name the character albert, victor or vincent its so funny
love the game, definitely will buy soundtracks or art pack in the future heehee

After being recommended to TWDAK, your games just drew me deeper and deeper. I LOVE VTSM as well, even more!

The layers of plots, the complicated characters, the puzzles that are various and moderately difficult- all combine to become this amazing game. Not to mention I fell in love with your art style immediately, it's sooooo sexy uwu! Also the relationship between Vincent and Victor is just delicious///// Can't help but wonder what Victor will do after CH4...

Looking forward to your wonderful work!

I love absolutely everything about this game fdjusgfjhssgh!

I got so into this, and there's a full sheet of notes I took to prove it (also at least 50 screenshots, with that "s" button on my keyboard it was just so easyyyy X'D)

Love the characters, plot, music, art style, just everything about it, words can't even say! I played this after Therapy with Dr. Albert Krueger and I really love the world you've built here and the way everything's connected. I don't care if it takes years, I'll definitely come back for more when this gets updated! :))

im so sad. this game is so good.

I love so much this game!! Will wait for next chapters as long as it takes, this masterpiece is worth it!!

Came here after Therapy with Dr. Albert Krueger, so excited to see this.

This game is amazing!! Especially at the end, I was shocked and very sad about what happended, look forward to the next update!!!!

I love this game soooo much and the story is literally AMAZING keep up the good work!!!!! Draco my beloved
Bought an art pack to support you <3

I'm in love with the game! It is one of the best games I ever played. I'm really excited for the other chapters

A really great game, it's really unique and rich, I enjoyed the art, the music, and the style in general, and the story is so interesting and exciting, I couldn't wait to see more of it, this game is everything I love about indie games!

I am actually so obsessed with this game, everything about it is so yummy to me. The art style is FANTASTIC, like everything looks so nice and clean! All of the characters are so cute, and their stories are amazing too! I want to know more about all of them!

Chapter 4 genuinely had me on the edge of my seat the entire time, and I was speechless at the end! It was so well done!

I'm so excited for chapter five and hoping for some more potential blakeworth interactions. Seriously, these characters have my whole heart. You're seriously a super talented writer and artist, and I hope you continue to be inspired to keep making more games! You're great at it!

I love this game so much!!!! This is so cool, the characters story have depths, and I flipping cried a couple of times playing this, really look forwards to the next chapter!

I am wildly recommending my friends to try this out as well, as a little support I can do, thank you Dino!!

Btw, I see people asking for dating sims of these characters, I mean yea all of them are just incredibly awesome, but that's kinda rude :( , hope you are not bordered and are doing fine too. : )

You are honestly one of my inspirations. I want to get into game development, but I lost motivation for the longest time, but after playing a few of your games and a few other games that I really enjoyed from other creators on this website, I'm back in it. You are probably one of my favorite (if not my top favorite) creator on this website!

I was also SO relieved when it was revealed that Draco and Vincent were still alive at the end of Chapter 4. I love both of them, but unfortunately Vincent's death was self defense... and Draco's death was just cruel :'( I ALSO KNEW DRACO AND VINCENT WERE BROTHERS WHEN DRACO REVEALED HIS LAST NAME. They look like they could be twins!

I'm mixed on Vincent's views though... I can 100% understand his motivations and I'd be justifiably angry as well, but not everyone at Myers was behind his torture. He should know this as well because of Victor. Victor clearly had no involvement. And with Vanora... I honestly feel like she's being manipulated by "Monsieur M" just like Vincent was. Monsieur M is a monster and he's the only person Vincent should be targeting.

how was it revealed that vincent and draco were still alive? if you're talking about the conversation at the end, i thought it was between victor and claude?

i got plot twisted so many times and it was amazing

I love so much the artwork and the story. The characters are very entertaining, and the story is sooo complex and engaging. the end of chapter four left me speechless, with many thoughts and looking forward to the next chapter. All your works are works of art!

I'm using a translator so it may not be very understandable, but I wanted to comment on how much I loved this